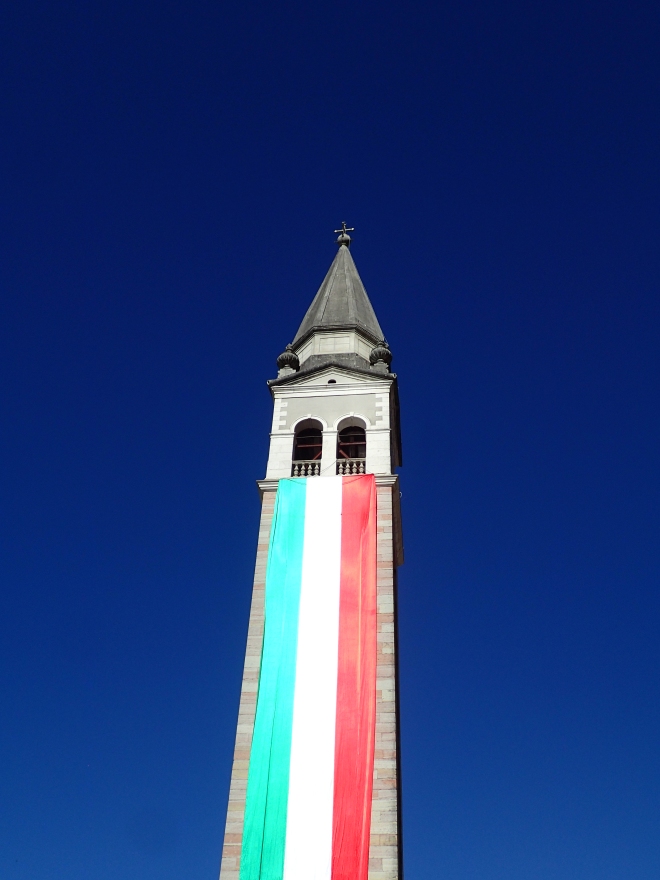 Start corral for the Athletes

The atmosphere in Italy was something else! This is the largest Ski Mountaineering event I have ever been a part of. It was almost surreal being surrounded by hundreds of people who are just as excited about the event as I was!

On the drive to Canada House you could tell that we were a part of something big. There were banners on buildings,patios and fences in a bunch of villages and blue ribbons and bows were all over the place to celebrate the arrival of the Athletes in Tambre.

The Canadians lucked out and ended up with accommodation right at the base of the first race venue. Initially we were going to be quite far from the race start, but due to the low snow pack they had to change the course! The day before the event there was a buzz in the air around our lodging. Cars were lined up and down the road carrying athletes and coaches from all over the World.

For the Opening Ceremonies each Country lined up down the road in alphabetical order, then we marched into the main square as a Team lead by some local youth carrying “Canada” and our flag. There were so many people in the stands and up the steps cheering us on! I couldn’t beleive how excited everyone seemed to see us.

The morning of the first race felt magical with so many spectators, athletes, coaches and race officials hiking up the road (300 metre vertical gain) to the start line. The Start line had a big entrance for the Athletes and banners all along the fences. World Championships are really here!

During the event, in the village of Tambre, there was a demo tent with all the main sponsors and a few of the main retailers for Skimo gear and apparel. There is without a doubt a lot more selection in Europe than North America for lightweight bindings and boots and breathable attire. They like to travel far and fast up the mountains and don’t seem to be able to prioritize pow like we do in Canada.

All information provided on this website is for educational and general information purposes only. Information should not be considered as medical advice. Consult with your Physician, Registered Physiotherapist or other qualified healthcare professional before taking action. The writer will not be responsible for actions taken by or consequences resulting from the readers actions based off of the content on this website and links. Thanks for reading!
Loading Comments...
%d bloggers like this: