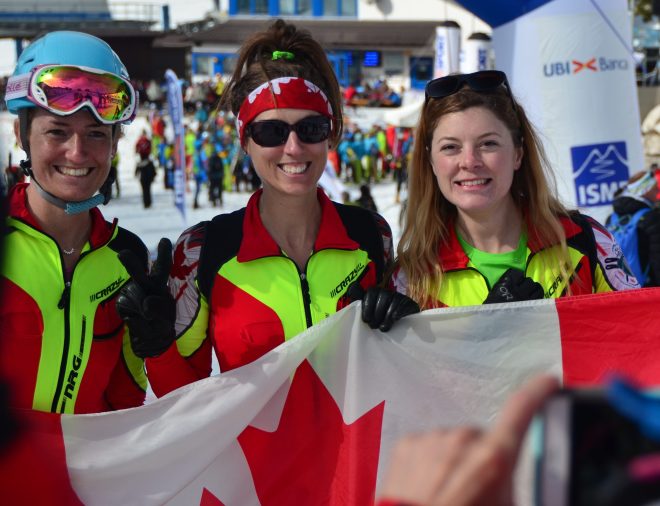 The Relay Race was the last race of the World Championships. The event was hosted at the Piancavallo Ski Resort on a beautiful sunny day.

The course involved two climbs, one with more technical switch backs and the second was a repeat of the Sprint Course with the diamond switch backs and a boot pack. The descents were marked with gates.

Racer 1 from each Team left the starting line at the same time. It was a flat sprint, then a small slight downhill with skins on before the technical first climb.

Here is Kylee, our first racer from Canada, battling Great Britain in the start of the second climb.

The second descent was the same as the Sprint race. Here is Canadian Racer 2, Michelle, skating over the second bump towards the transition zone.

Racers have to physically touch the next racer within the transition zone that is marked on the ground. If you do not tag within that zone there is a time penalty. Here Michelle makes contact with me perfectly in the zone.

As the final racer from Canada, my task was to overtake the racer from Great Britain that was ahead of me. Using some of the skills I picked up this Fall from my Cross Country Ski Friends in town, I was able to pass my competitor in the first skinning section that involved a small downhill angle. The next section was quite technical with two tracks to choose from. I slipped at one point and my competitor was able to pass me on the inside track.

I was able to pass Great Britain again at the top of the second climb. I have been practicing my transitions a lot this year and this transition was the best one I have ever done in my life! I clicked my boots into downhill mode, switched my bindings and ripped both skins off in record time. Then onto the descent!

I was more cautious in the downhill than I would normally be, given that I already had the lead and needed to maintain it.

In this transition I had to put my skins back on. I had a second set of skins in my suit, as the other ones I had ripped off earlier were in a giant ball inside one side of my suit. I had a little bit of trouble getting them apart, as I did not have them folded in the way that I normally do. Always double check your gear!

I was feeling some fatigue at this point, but motivated to continue to maintain the lead. I continued to lead through the switch backs and down the final descent.

I crossed the finish line to the sound of the announcer celebrating Team Canada and the crowd cheering us on. It was a wonderful experience competing with Kylee and Michelle as a Team and representing Canada. What a fantastic way to end the World Championships!

Excited to officially announce our team @mountainsportclinic!
Fun laps on the Kananaskis River this weekend! So good to be back busting out the moves in our playboats!
Morning views in Nelson, BC today!
Fun lap down the Slocan River yesterday with @nachopicsdaily and Dave!

All information provided on this website is for educational and general information purposes only. Information should not be considered as medical advice. Consult with your Physician, Registered Physiotherapist or other qualified healthcare professional before taking action. The writer will not be responsible for actions taken by or consequences resulting from the readers actions based off of the content on this website and links. Thanks for reading!
Loading Comments...
%d bloggers like this: